Acclaimed filmmaker Niki Caro brings the epic tale of China’s legendary warrior to life in Disney’s “Mulan,” in which a fearless young woman risks everything out of love for her family and country to become one of the greatest warriors China has even known. When the Emperor of China issues a decree that one man per family must serve in the Imperial Army to defend the country from Northern invaders, Hua Mulan, the eldest daughter of an honored warrior, steps in to take the place of her ailing father. It is an epic journey that will transform her into an honored warrior and earn her the respect of a grateful nation…and a proud father.

The epic battle was shot in a valley on the South Island of New Zealand. The plates had a lot of natural environment in them. Artists had to add a mountain that would be the site of an avalanche and the foothills leading up to the mountain. They added mountain extensions including 2D and 3D features to the battlefield itself along with rocks and steam vents to give the appearance of thermal pools in the ground.

Imageworks was tasked with producing 20 to 30 hero shots of the avalanche sequence which was one of the biggest visual effects sequences in the movie.  Artists broke down the avalanche into two different types: wide establishing shots, and more immersive shots.

To achieve the avalanche effects, Imageworks built a new system inside Houdini called Katyusha, for simulating snow and ice. In addition to going with a volumetric approach, the team committed to simulating many passes as a way of ensuring flexibility in comp.

One hundred percent photorealism was the ultimate goal. Artists referenced tons of real avalanche footage. However, the only thing that was not exactly true to real life was that sometimes artists slowed or accelerated the pace of the avalanche. They adjusted timings for storytelling purposes and to serve the edit.

Imageworks added two different types of horses to the scene. One was Mulan’s Blackwind, built and detailed employing upgraded tools so that it would hold up even right in front of the camera lens. It was a very detailed model that had a new muscle sim system under it. The dev team created a new hair solver called Fyber that was much more interactive and much less data-heavy so artists could integrate faster. These new tools allowed Imageworks to excel in creating photorealistic creatures.

Production side VFX supervisor, Sean Faden, encouraged Imageworks to create what he called the ‘Pepsi Challenge,’ running slow-motion footage of Mulan on Blackwind, riding through a canyon, side-by-side with the CG Blackwind. Artists rotomated the footage of Mulan on the horse, matched the lighting conditions, and matched the CG horse to that horse.

Artists based lower-res background horses on the Blackwind model, varying coloring, manes, tails and other characteristics.  They created as many variations as possible to make sure that crowd scenes never looked repetitive.

The CG Blackwind is seen in battlefield shots too chaotic and dangerous to be shot with a real horse, and in shots in the following sequence, in which Mulan races to catch up with her friend and ally, Chen Honghui (Yoson An) when he is swept up in an avalanche. For this sequence, Mulan was shot on a green mechanical buck and replaced that with a CG horse. Its face, mane and body are right in front of the lens in some shots.

The vast size of the South Island location required the team to multiply the combatants and horses by a factor of three to five. There were practical people in most of the shots which gave artists something to match to. To fill out the crowd digitally, artists built a hero army soldier and a few hero Rourans, then used new tools to feel the basic models plus variations of the crowd system, creating ten different versions of the Rouran or soldier. Imageworks developed new tools so  animators could block the crowds as needed and the crowd system would them simulate their cloth. If we needed a character to perform a motion, artists could promote them to a hero asset and animate them and then fit them back into the crowd system. Artists had much more functionality in our crowd system. 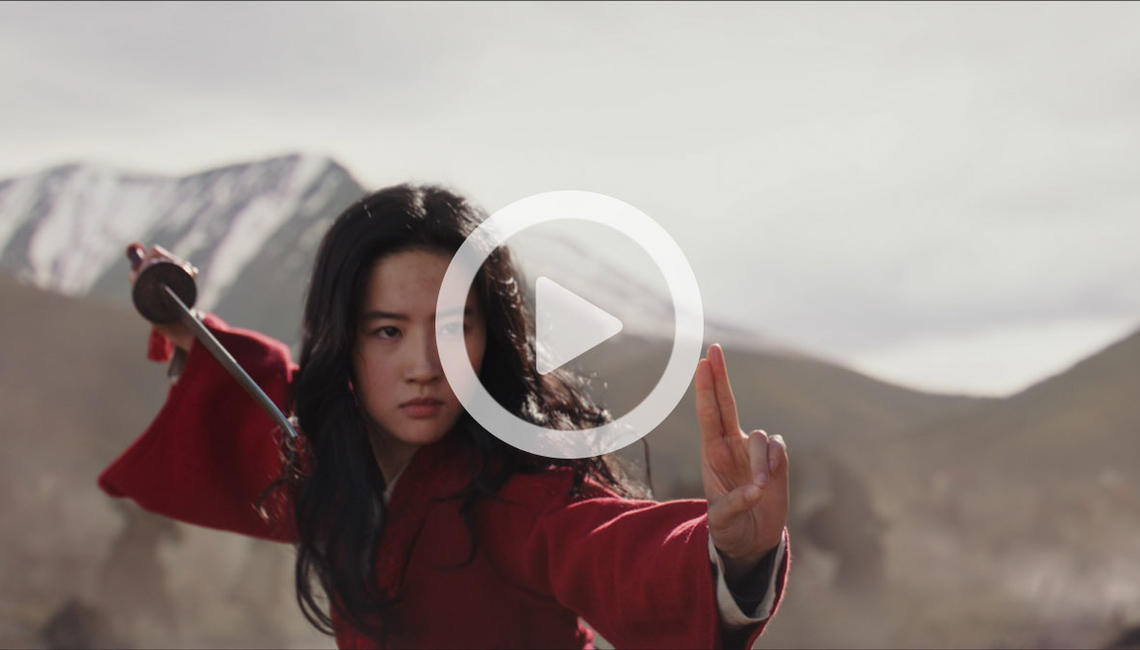